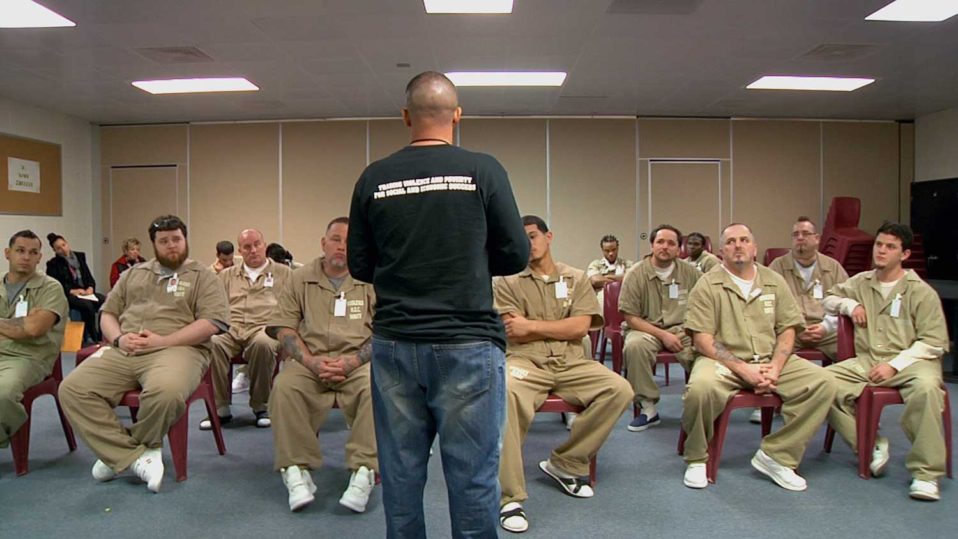 “Beyond the Wall” explores the struggles of staying sober after incarceration.

Louis Diaz was a legend in the Lowell, Massachusetts, projects where he was raised.

“I grew up hearing about Louis stealing cars. I wanted to steal one better,” says Billy Cabrera.

More than 20 years and one prison sentence later, Diaz is still hitting the streets, but he’s establishing a new legacy as a tireless substance abuse counselor and re-entry specialist.

The new documentary “Beyond the Wall” follows Diaz into the Middlesex County House of Correction and on the streets of Lowell and Lawrence as he works with prisoners and parolees or returning citizens in a system that provides little re-entry support.

Diaz, filmmaker Jenny Phillips and Middlesex District Attorney Marian Ryan were on hand for a recent screening and discussion of the documentary at Lesley, which was sponsored by the Mindfulness Studies program and Diversity Council.

“As soon as I learned about ‘Beyond the Wall,’ I invited Jenny to screen it at Lesley,” said Dr. Nancy Waring, director of Mindfulness Studies. “The film is so in keeping with Lesley’s social justice mission and with our mindfulness program’s focus on compassion.”

The film’s weighty subject matter is an important topic for the community to engage with, said Beth Tallett.

“Lesley University has a strong community of artists and activists, and it is inspiring to see how Jenny uses her art to help promote the courageous work that Louis is doing for his fellow man,” said Tallett, manager of Community Engagement and Special Programs. “I am honored to be a part of any event that sheds light on the unacceptable recidivism rates in this country and the disproportionate number of people of color in the criminal justice system.”

Giving the public a fresh view on the criminal justice system and “returning citizens” was one of Phillips’ goals in creating the film. As a psychiatric nurse who has brought mindfulness and meditation practices into prisons, Phillips created “Beyond the Wall” to give the public “a different way of seeing people that they might have discounted before.” The film features five returning citizens mentored by Diaz over the course of four years as they face addiction, gang involvement, suicide and recidivism.

Diaz attributes his own recovery to a group of mentors with whom he surrounded himself when he was paroled. That support system kept him sober when he was overwhelmed by life on the outside, and he knew the same model could help others.

“I knew that I had a calling. I needed to let others know that there is a way out,” Diaz says.

For released prisoners, relapses and recidivism are the rule rather than the exception as they return home and fall into the same destructive patterns.

At any given time, Diaz mentors 15 to 20 men who regularly call him for help. He canvasses the neighborhoods where he grew up, urging addicts to get treatment and driving them to detox facilities. He visits prisons and tries to persuade the men to put a realistic plan in place before their release.

“I have the disease of addiction and this is how I treat it,” he said.

Diaz’s mentees in the film try and fail and try again to get their lives in order with varying levels of success.

Diaz mentored Cabrera after his release. The film shows Cabrera establishing his own barbershop-cum-resource center where he provides materials to help returning citizens.

Cabrera is thriving as a licensed barber, but many of the others in Diaz’s sphere of influence have a harder time reforming their lives.

The film shows Jesus Ruiz in his final days of incarceration. In and out of jail since age 17 on various charges including drug dealing, the 29-year-old has six children and a chaotic upbringing: his mother dealt drugs and his father was a sex offender. A walk through the family cemetery plot reveals further chaos — in-laws stabbed to death, an uncle who had AIDS and a baby who succumbed to sudden infant death syndrome (SIDS).

Over four years, Ruiz vacillates between highs and lows — he gets promising though low-paying jobs but loses them when he starts using drugs again. His children are put in foster care. His girlfriend gets a restraining order against him. He is jailed again. He repeats Diaz’s mantra — if you continue doing what you’ve always done, you’ll continue getting what you’ve always gotten — yet can’t quite make it stick.

Diaz remains a constant in Ruiz’s life, meeting with him regularly and urging him to choose a new path.

As an anti-recidivism evangelist, Diaz often seems to be fighting a losing battle as his mentees struggle to stay sober, but local officials are increasingly mobilizing around the issue and working to reduce the stigmas around mental health and addiction that contribute to repeated incarcerations.

“We started looking at it as a public safety and public health crisis,” said District Attorney Ryan.

In recent years, opioid abuse and addiction have become endemic in Middlesex County, and Ryan has worked on preventative and supportive measures for kids and adults. The county should see a 21 percent reduction in fatal overdoses by the end of 2017, due to these efforts, she said.

Members of Boston’s Office of Returning Citizens also attended the screening. The new office was created as a resource for the more than 3,000 people released from prison in Boston each year.

“When they get released, they’re like deer in the headlights. They don’t know how to get help,” said office Director Kevin Sibley. “We’ve got our work cut out for us.”

So do Diaz and Phillips as they tour the country to screen “Beyond the Wall” to police, prisoners and the public. They’re also urging people to get educated and involved. The public can host screenings, volunteer at hospitals to hold babies affected by drugs, or donate homemade blankets to Project Linus for kids suffering from trauma. There is need in every community and many organizations working to alleviate addiction, trauma and recidivism, said Ryan.

“There are lots of opportunities to do something.”

Your ticket for the: America’s post-prison problem