Most people will be released from prison, but what happens to them when they leave? Beyond the Wall follows five formerly incarcerated men who are attempting to rebuild their lives on the outside with little support from our criminal justice system. Their stories revolve around one central figure, a former prisoner named Louie Diaz, who works with each man to help him maintain his sobriety and his freedom. Through compelling and intimate scenes, the film vividly captures the struggle for survival outside prison walls.

A discussion with Louie Diaz and Producer/Director Jenny Phillips will follow the film screening. Jenny Phillips is a cultural anthropologist, filmmaker, writer and psychiatric nurse. She has a psychotherapy practice in Concord, MA, specializing in crisis intervention, family and marriage therapy, behavioral medicine, and mindfulness training. In 2002, working with the Alabama DOC, Jenny successfully brought a Vipassana meditation program inside a maximum-security prison in Alabama. In 2008, Phillips produced and directed a documentary film, The Dhamma Brothers, with a national theatrical release and national broadcast on public television.

Sponsored by: The Mindfulness Program in the Graduate School of Arts and Social Sciences and the Diversity Council of Lesley University. 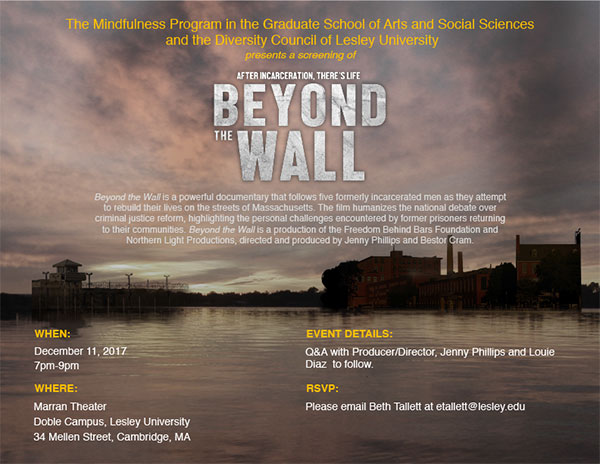 Make sure to copy Registration number after successful submission.

Thank you for payment.

Your ticket for the: Lesley University Screening and Discussion